Way to many to mention here. Let’s try it anyway…
From the early Jamacain Ska and Reggae to Punk, Psychobilly, (classic)rock, metal, folk and even some electronic stuff… I mostly can’t stand commercial mainstream music.

Really hard to choose a top 10. This is in random order and I would probably change my mind the next time you ask me…

As I mentioned before, I like a lot of different styles of music. I’m not going to mention over 250 artist. Just ask me if you want to know more about my preferences.

I think it was Metallica in 2003 or some local bands in “De Oefenbunker”.

I played my first concert in 2004 in “De Oefenbunker” in Landgraaf. The band was called ‘Tribe War’.

Well, I really like playing on stage. Hard to choose most interesting event.
Once I smashed my head into the headstock of a guitar. The guitar player stepped backwards while I was head banging. “Raining Blood”…

I got ‘Mutter’ by Rammstein and slipknot’s self titled album in the same time. Still like listening to those albums, but I’m not into nu-metal anymore. By that time I was 12 years old and started to develop my musical preferences, i think it got a bit of out hand…

Despite the things I dislike I can be a nice person, just be nice to me and make sure you try to contribute to society in a good way…
Except being a musician, I’m a part-time student social work and working a job as a warehouse employee. 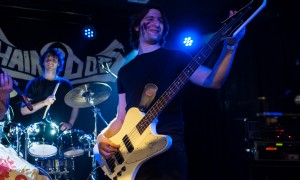