Guitar and bass. I play guitar in Chain of Dogs

Quite a lot. My interests vary from Blues to Country to Thrash Metal to Punk. My main influences on guitar are mostly Blues players like Rory Gallagher. I’m very influenced by 80′s Thrash Metal like Overkill and Exodus as well. Oh yeah, don’t forget about Outlaw Country and some Old school Hardcore Punk.

I’m not an album kind of guy… I usually just like a couple of songs on most albums.

There are way too many bands for me to mention here. I like most of the NWOBHM stuff and a lot of 80′s Thrash like I mentioned earlier. If you want to know more about the bands I listen to, just ask me.

It was with my old band which was called Serpent Steel. It was in some old building in Heerlen. We actually opened for Chain of Dogs.

Every moment on stage is an interesting moment, but if I have to choose it would be almost falling because I stepped into a hole in the stage (which was at that same building I just mentioned).

Queen greatest hits 2. I know it isn’t a metal album but it was sure as hell one of the most inspiring things I ever got.

I don’t read that much, I prefer watching movies. I’m a fan of late 80′s and early 90′s comedies.Movies like Biodome, Wayne’s World, Half Baked, Bill & Ted, Freddy got Fingered etcetera. I also like horror movies like Blair Witch Project or Dracula. Not the Slasher kind of horror you see nowadays. And last but not least I like movies that take place in another time. Mostly historical but it can be science fiction too. Oh yeah… FAIL COMPILATIONS!

If you want to know anything else,  just ask me when you see me 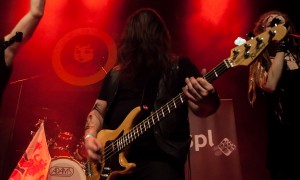